The Norway Chronicles - Chapter One - Swimming Pupa in the dark

It´s 11.30 in the morning, and you´re about to get up. The others are still sleeping, so you decide to get a pot of coffee going before waking them. A quick glance at the river shows you what you have already expected: nothing. The river is dead.

When everybody is finally out of the tent, you´re having that kind of slow paced brunch that tells you´re not at all in a hurry - after all, things wouldn't start to get serious before eight in the evening.

You´re spending the afternoon with tying flies, drinking coffee, casting and, of course, talking about the fishing you had last night and probably will have the next.

As a German greenhorn, you´ll listen to every single word, story and advice of the true Norwegian troutbums, who somehow always seem to stay up an hour later than you do in order to catch a couple more trout than you do.

After a fairly early dinner, say around seven, everyone´s slowly getting into the waders, checking flyboxes and leaders. Then, you venture off along the riverbanks, usually with a partner.

You´re looking out for a nice place to fish (you´ve probably seen a big trout rising there the other night), sit down and wait. Tip: a beer usually helps to overcome the waiting time.

Swimming pupa describes a certain part during the lifecycle of a caddisfly. It´s when a caddis larvae has turned into a pupa and then risen from the bottom of the river to the surface, where it is trying to swim to the riverbank where it can complete its transformation to an adult insect.

In the fading evening light, this looks like a small dark thing zig zagging in an 45° angle downstream towards the shore. Actually it looks like the pupa might be drunk, although it is more likely that it´s a little confused and dizzy because of its new surroundings. Teenagers can be like that.

However, the trout seem to like pupas, and as the pupas get more and more you´re also noticing more and more fish rising in a splashy and aggressive kind of way.

When you´ve found a nice riser you´re trying your best to imitate the pupas.

First one: you have to get that 45° angle, otherwise the fish wouldn´t look at your fly, or, in the worst case, be spooked.

Second one: you have to imitate the zig zagging by shaking your rod tip as if you had parkinson (No pun intended, but that´s how it is). Otherwise the fish wouldn´t eat the fly either.

The pattern, most fisherman use for this kind of fishing, is a really ugly one, mainly consisting of a little stripe of foam on a hook. You can add little extras like a dubbed body or some hackles in front, but usually all what counts is the right movement of the fly.

If the foam pupa does not work, another good option would be the famous "Animal" or, as the Norwegians call it, "Dyret".

It is basically some deer hair tail fibers and a dubbed body which is palmered with a fairly long fibred hackle (with the fibres on the back and the belly being cut off).

The biggest problem when it comes to night fishing is the light, or, to be more precise, the lack of light. When sitting at the riverbank with trees and high grass behind you, casting during daytime can be quite difficult already, especially when you´re having a nice fish rising only few meters away from you.

But in the dark, a five meter cast seems more like a fifty meter one, and most of the time the fly and leader get tangled somewhere. When you finally got that fly out into a direction you think might be fine, you´ll start to wonder where the f*ck the fly might be...

It´s that kind of fishery that makes you so frustrated and angry that you´re tempted to break your rod from time to time. Or you simply cry.

If you´re lucky and finally did get everything right you can be rewarded with beautiful trout that can really put up a good fight. But more often than that, you´ll fuck it up. 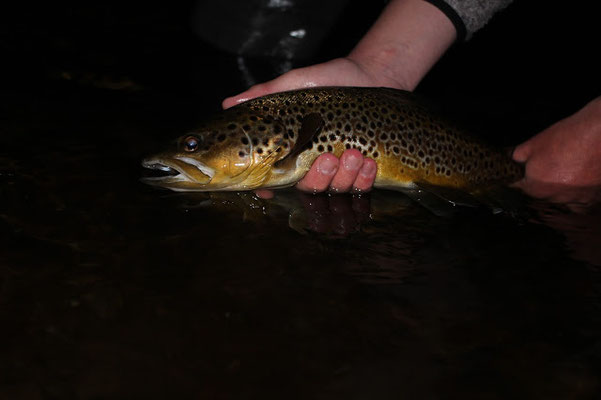 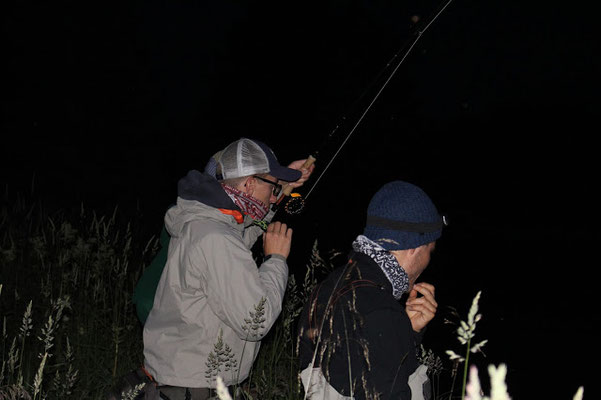 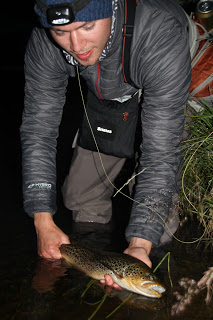 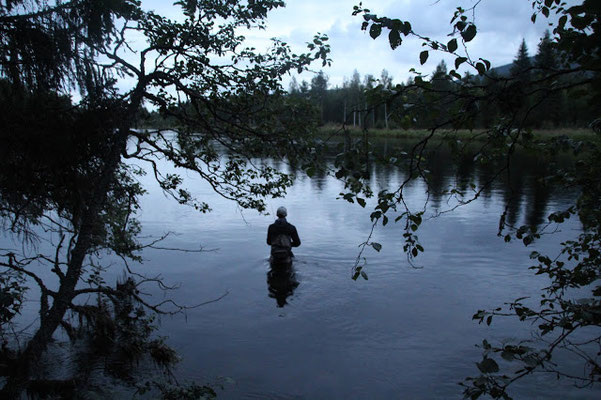 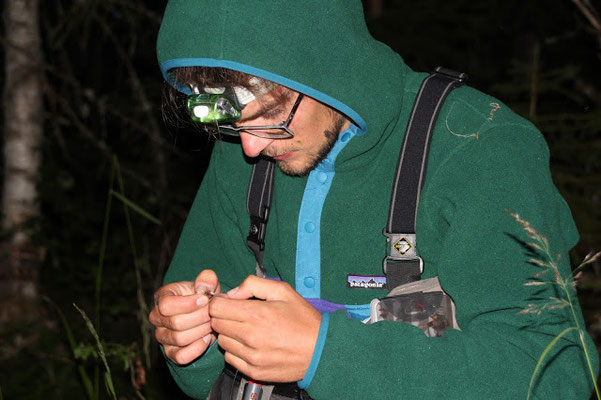