Nowadays, drones are used by firefighters, architects, research organizations and, if you have the money, by yourself!

They help to escape cinematographic boundaries, and bring a new dimension into the game. And meanwhile, people start catching fish with it, according to some crazy videos on YouTube...!

I don’t want to offend anyone by saying, drones can make a beginner look like a professional, but it just looks so great! (when you manage to get the shot, and don’t crash into a tree…)

And no question, even professionals can enter the next level with the support of a quadro-, hexa-, or octocopter.

That said, I nearly bought myself one of those "toys". But I realized, that it wasn’t worth for what I wanted to do with it. In my opinion, drones are suitable for those, who have a deep passion for cinematography or in general, for filming. But as the fun-factor of actually flying one of those is so high, many beginners or mid-level-YouTubers now tend to have one, what I absolutely understand!

Sure, it is always fun, but one need to be aware of the risks, that drones can have on public or ones budget.

I’m missing the point, now the actual story I wanted to tell you guys. Last summer, after another successful flyfishing trip with our youth group, two guys asked me, if I could just return to the river and make a couple of casts while they film it with one of DJI’s more professional quadrocopters. Of course, I affirmed and we discussed, where it would be nice to stand from a cinematographic point of view. As I found out, those two run a company called Vision Impossible, flying missions in all kind of forms.

We quickly found a nice spot, and the fun began. It is incredible how much power these drones have! The sound when lifting, the speed, and also the image quality are just insane!

I got a bit nervous when that thing came close to my head but I counterattacked by casting the flyline perfectly besides the drone. Looking back, I think I was not aware of the consequences a potential drone-crash in the Isar river would have had.

Well, in the end we got the shot and I was super stoked, watching the finished clip a couple of weeks later.

The perspectives and possibilities that you can get with a drone are just endless!

We were all super exited about another shooting, that just had to be done.

So not long ago, same story, another day and this time in the heart of Munich. The Isar river was as clear as it could possibly get and the weather was just amazing for this time of year!

We knew that a flycaster with an orange jacket and two guys with a drone would catch a lot of attention in public, but that didn’t really bother us, as most of the people are super excited and interested when seeing either a flyfisherman or a drone.

Again, the shoot was amazing, even better than the first one and after about two or three hours we called it a day.

It probably was the drone that caught most of the attention but as it was mostly flying close to me, there was some focus on the small orange-jacket-guy down in the water, too, who was casting an orange line into the pool.

Drones are good and they will definately have a bright future, but as more and more people have one, I can totally understand the decision, that one need a permission to fly it in public areas.

A drone mustn't be able to record you wherever you are, you must have your own privacy for yourself.

But safe flights to all of you drone-pilots out there and as always, 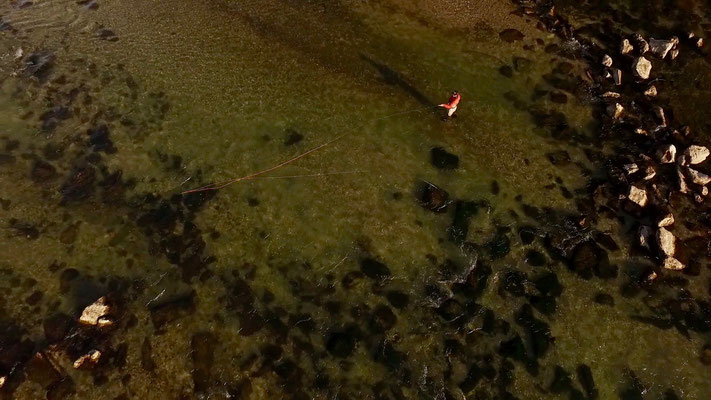 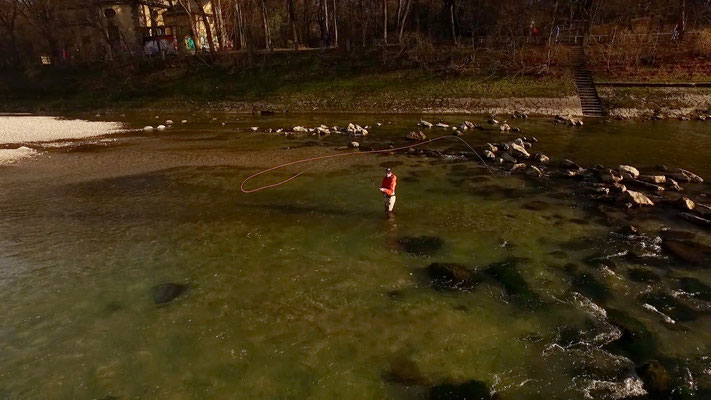